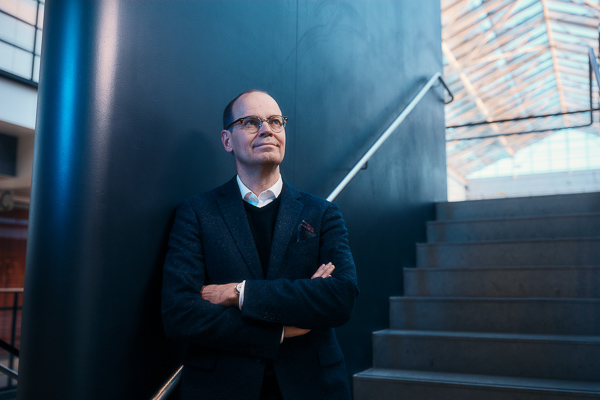 The heart pumps, the liver metabolizes, and the lungs exchange gases, but what does the brain do? This simple question has been the subject of a million philosophical reflections. Now, when even our home appliances have artificial intelligence, it is startling that we still know so little about what the brain does and how it works.

The Kalevala, the national epic of Finland, has a line that says “my brain is thinking.” But what is thinking and how does it happen? And the brain does far more than just thinking: it feels, it emotes, it controls the body’s movements and the functioning of the internal organs, just to list a few. Is the brain just a collection of these different functions, or is there a common principle underlying all these functions? Mice and flies also have brains: so, do their brains work according to this common principle, or are human brains essentially different from theirs? If we could design artificial intelligence according to the same principles as our intelligence, could we make them better and safer?

The discipline of science that studies brain function is called neuroscience. Research in neuroscience has grown enormously over the last few decades, and there is enough experimental data regarding neuronal structures and functions to understand the function of neurons reasonably well. Nerve cells act through networks formed by multiple neurons. New methods for investigating neural networks have recently been developed, and these networks are currently being actively studied. However, we still lack a framework that enables these results to be combined in order to understand brain function. This is partially because neuroscientists have considered this problem so distant and difficult that it has been thought to be beyond reach of experimental methods. The well-known American neuroscientist Rodolfo Llinas described it well when he said that we know about brain everything, except how it works.

“We know everything about brain, except how it works.” –Rodolfo Llinas

But the times are changing. An increasing number of neuroscientists are interested in this big question, and serious literature on this subject has begun to appear. For example, research in cognitive neuroscience suggests that the brain predicts, in a way guesses, what the information received through the senses could represent. With experience, the brain learns and is able to predict and interpret its environment better and more accurately. In young infants with little sensory experience, such prediction is rough; however, in childhood, the brain is in a state of increased sensitivity, wherein new experiences change the structure of the brain and its ability to improves constantly. Later, in adulthood, the brain no longer needs to change its structure as it encounters new information, instead relying on prediction provided by experience.

While prediction as a reference framework for brain function remains controversial and there are many open questions, these new studies are important because they deal with the big question of how the brain works. At the same time, they raise new questions and hypotheses that can be solved by scientists from different areas of neuroscience working together. Huge advances have been made in many areas of neuroscience over the last decades, with a whole new set of research methods available for exploring brain activity. Brain imaging methods are constantly being refined, and their combination with functional imaging is rapidly evolving. Computational and theoretical neuroscience research develops models that can be tested by experimental neuroscience. It is reasonable to assume that the solution to the age-old riddle about brain activity may be close at hand.

Understanding the functioning of the brain would open up new perspectives on abnormal brain function and how it could be alleviated or corrected. This is crucial because a large part of the population suffers from brain and nervous system disorders, and their mental and economic burden on patients, their families, and society as a whole is enormous. The explosive growth of research and applications of artificial intelligence in an increasingly wider society could also benefit from a better understanding of brain function. Moreover, artificial intelligence could be a great tool to study and model how the brain works.

Neurocenter Finland is currently being established as a national platform. Neuroscience is a strong research area in many Finnish universities; by coming together on this platform, we can make better use of our unique expertise in the many specialties of neuroscience. We are very enthusiastic about this project: in the short inception period, there has been a great willingness to work together in different disciplines, across universities and research centers, for a better understanding of normal and abnormal brain function. Neurocenter Finland aims to bring together all those who have a role to play in promoting neuroscience and understanding brain function—from social scientists to engineers and physicians to scientists. New ideas, initiatives, and methods are welcome for this common effort, which aims to answer perhaps the most important question posed by mankind: “How does the brain work?”