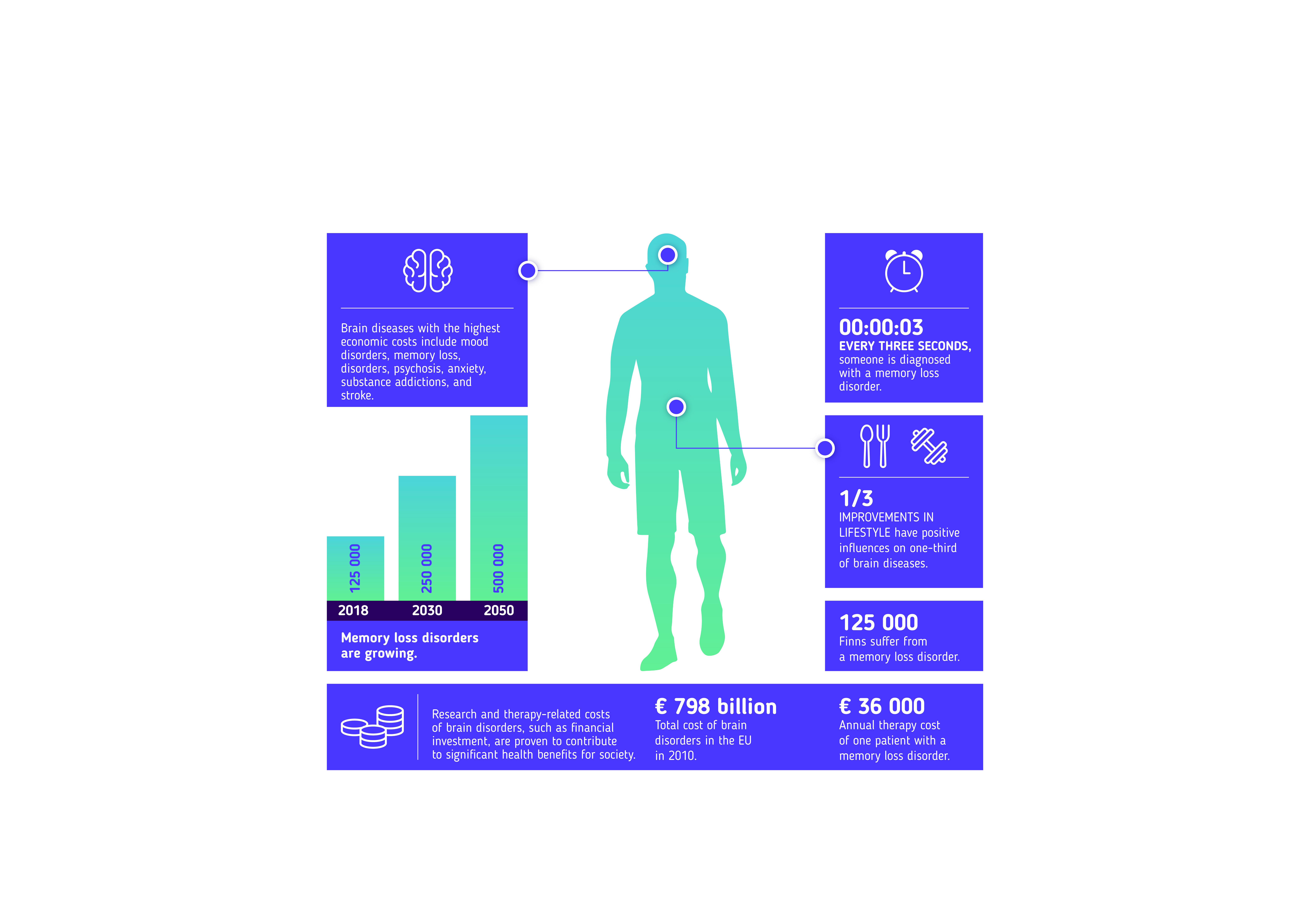 At some point in life, every Finn is affected by a brain-related disorder, either in their own life or in a close relative’s life. Apart from mobility issues, the symptoms of brain disease may appear as problems in cognitive memory, observation, understanding or speech-related difficulties. Brain disorders can cause behavioral dysfunction or issues in alertness;  they can also manifest as depressive or other psychiatric symptoms. Because of the complexity of brain function, brain disorders are often difficult to diagnose and treat.

In 2010, the economic cost of brain disorders in Finland was estimated to be around 8.6 billion EUR. Brain diseases were responsible for nearly a quarter of direct healthcare costs. In the future, as Finland’s population ages, healthcare costs caused by brain-related diseases are expected to increase considerably.

At present, approximately 125,000 people suffer from memory disorders in Finland, with 14,500 more individuals diagnosed every year. The economic costs of memory disorders depends on the stage of the disease. The social cost of therapeutic care is nearly EUR 1 billion, of which approximately 85% is due to 24-hour care required by these individuals.

One in five Finns becomes ill with depression during their lifetime, and over half of these experience chronic, permanent recurrence. Episodes of depression are most common in adolescents, and the incidence decreases with age. Among young adults in Finland, almost one in five has suffered from depression. Two and a half million work days are lost each year as a result of depression-related illnesses, with a total cost of 900 million EUR. According to the WHO forecast, by 2020, severe depression will become the second-most important public health problem worldwide after coronary heart disease.

The rapid development of medicine can contribute to healthcare spending. As diagnostic methods improve, brain diseases can be identified and treated earlier. However, as more and more of us live for nearly a hundred years, each individual can suffer a greater number of illnesses during their life and be treated for them. Western lifestyles have been shown to increase the prevalence of lifestyle diseases and brain disorders in the population.

With research, we can improve the prevention and treatment of brain diseases

Society should be better prepared for the burden of brain diseases by investing in research for preventive measures as well as their treatment. Apart from the human aspect of care, support for scientific research on brain disorders from public funds is a profitable investment for the future of Finland.