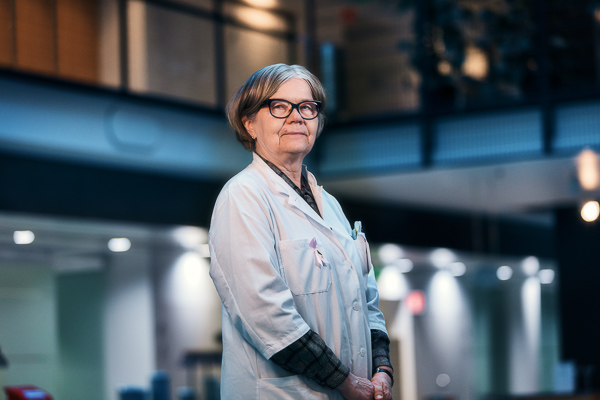 ‘My back hurt and I slept badly.’ A phrase familiar to many of us, either first-hand or heard from a friend, colleague or family member.

It was previously thought that pain interferes with sleep. Long-term follow-up studies have subsequently found that sleep issues may precede problems with chronic pain and neurodegenerative diseases. A vicious circle is gradually formed: poor sleep promotes the worsening of pain, which shifts from localised pain to more generalised, severe pain, and the person in pain sleeps worse and worse. These problems lead to other issues, such as changes in mood and decreased cognitive ability. In other words, the individual’s attention and memory deteriorate because of the lack of sleep compounded by pain.

Issues with pain and sleep have been linked to neurodegenerative diseases, and it is important to look at these interactions in greater detail.

The social impact of pain

The total economic cost of back pain is about EUR 2 billion a year in Finland: the problem is extensive and multidimensional; patients need support via disability or sickness pension, especially for chronic or prolonged pain. Particularly troubling are the increasing rates of chronic pain in children. The University of Eastern Finland has conducted various studies involving children suffering from pain; and these studies have established that the incidence of pain is closely involved with poor sleep and poor physical condition. The schoolchildren included in these studies suffered from neck and back pain, and some even had widespread pain.

Pain and sleep: a team sport

Evolution has defined the role of pain to warn the individual of a threat. For example, a young child quickly learns not to pour hot water on the foot. The associated pain is memorised, and the experience ensures that the child does not play with hot water again.

During REM sleep, our brain deals with the previous day’s issues and tries to arrange them for emotional wellbeing. Chronic pain is often associated with emotional difficulties, as a predisposing factor as well as a follow-up problem. Brain imaging studies have shown that when prolonged, pain shifts from sensory nerve networks to emotional networks.

The anxiety and fear of pain experienced by the patient, is often associated with chronic pain and difficult recovery. For these patients with such ‘catastrophic exposure’, the anxiety caused by pain is likely to worsen sleep issues, which in turn leads to further chronic pain. The vicious circle of pain and sleep thus continues to intensify.

The glymphatic system and neurodegenerative diseases

Sleep issues negatively affect the glymphatic system, which is the brain’s waste clearance pathway that works during non-REM sleep. The glymphatic system cleans the brain of substances that promote inflammation. If a person does not sleep enough, this brain cleansing does not occur effectively.

In recent years, the glymphatic system has received international interest. Researching this process in a non-invasive manner is challenging. In Finland, at the University Hospital of Oulu, Docent Vesa Kiviniemi has done ground-breaking research in developing detection methods for the glymphatic system.

“If the patient suffers from sleep problems, the glymphatic system does not work appropriately and is unable to remove neuroinflammatory agents from the brain tissues.”

Researching the glymphatic system is also important because in the last decade, studies have found links between the inflammation of neural tissues and neurodegenerative diseases, such as multiple sclerosis (MS), cerebral infarctions, and Alzheimer’s disease. In such neurodegenerative diseases, the neuroglia—which are the supporting structures for nerves—become irritated and begin to release proinflammatory agents.

If the patient suffers from sleep problems, the glymphatic system does not work appropriately and is unable to remove neuroinflammatory agents from the brain tissues.

Fortunately, it is possible to intervene in the problems resulting from pain, sleep issues and their consequences. Issues that have contributed to poor sleep can be influenced by addressing related factors and the sleep environment. For example, it is important to exercise and move during the day but calm the body down in the evening. The brain calms down when you stop playing or working late at night. The brain can also be calmed by various psychological methods. The Finnish Sleep Research and Technological Skills centre has developed several devices for sleep monitoring. These can be used by the individuals themselves, and they can also be used to support treatment and rehabilitation.

The virtual pain management centre does not replace the relationship between the doctor and the patient but can support it: for example, by preparing the patient for the treatment cycle and continuing to communicate with the patient after the treatment period for prolonging the treatment response. Additionally, the MentalHub is developing a smart phone application that will allow users to participate in a 4-month sleep programme. Physicians all over Finland can refer patients for the online programme provided by the Pain Management Hub, based on their assessment regarding the suitability of online therapy.

A report by Finland’s Ministry of Social Affairs and Health regarding the organization of treatment for chronic and cancer-related pain was sent to the Minister of Health in February last year.

Investments are required for research into pain and sleep, but these investments pay for themselves. The decision-makers can no longer afford to ‘sleep over it’ on this matter.